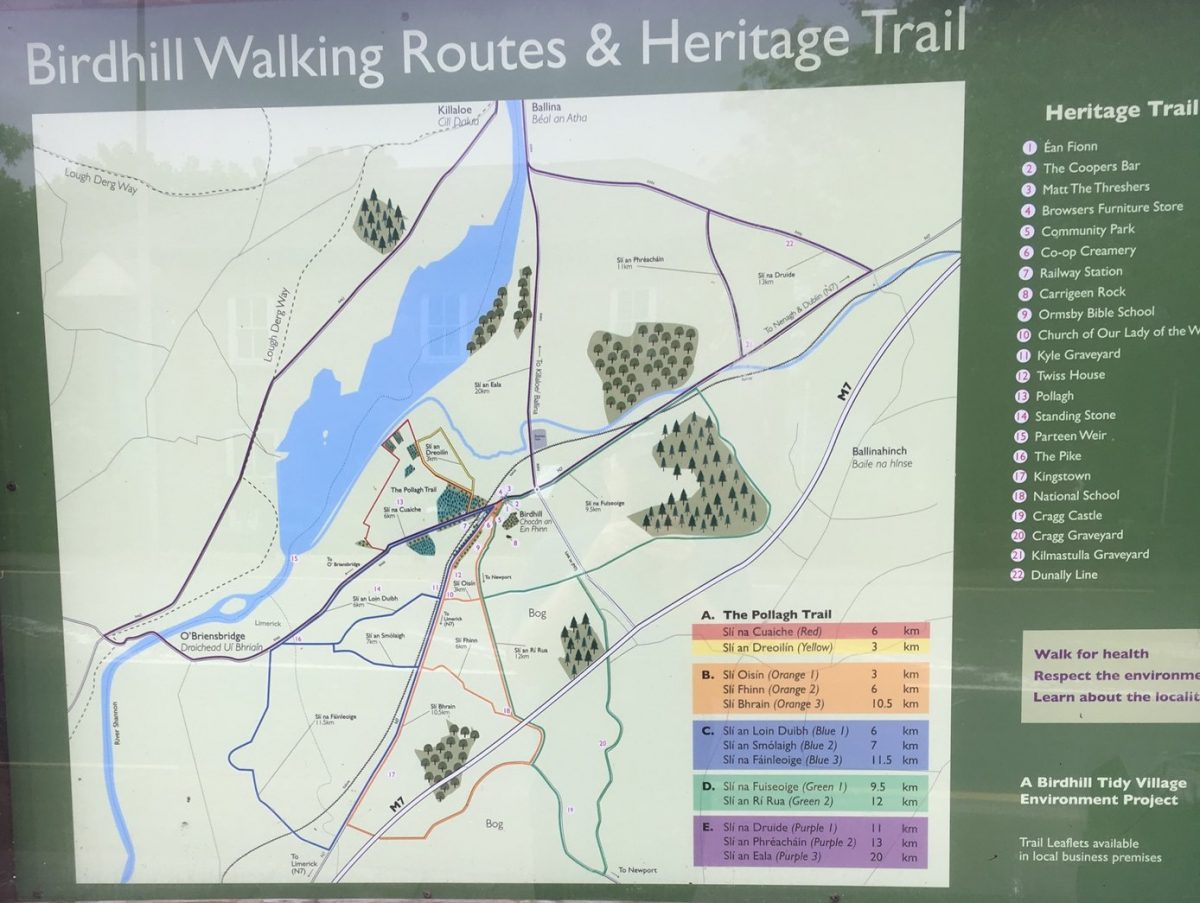 1. The Éan Fionn.
Birdhill derives its name from the Irish Cnocán An Éin Fhinn (the little hill of the white/fair bird). One of the legends from local folklore is engraved on the plinth of John O’Connor’s stainless steel sculpture erected on the Village Green in 2002.

2. Coopers Bar.
The ancestral craft of the Ryan Cooper family, proprietors of the business since 1985, is depicted in a painting on the gable wall. The building stands on the site once occupied by Carey’s Hotel, a favourite wayside inn of ‘The Liberator’ Daniel O’Connell on his travels from Kerry.

3. Matt The Threshers.
Taking its name from the famous character in Charles Kickham’s Knocknagow, Matt The Threshers has operated as a licensed premises under a variety of names since 1890. In 1982 Matt The Threshers was bought by Tony Ryan (G.P.A. & Ryanair) and the building was redesigned by the famous architect Sam Stephenson. Ted & Kay Moynihan acquired the premises in 1987 and developed it into a leading restaurant and bar with a distinctive old-world charm.

4. Coffee Roastery.
The building now occupied by the Coffee Academy and Roastery is the oldest in the village. First built about 1720 as a home for retired nurses, it was used in the mid 1800’s by the Twiss family, local landlords, as quarters for their servants. It was a Garda barracks from 1927 to 1961 and was home to various families for a couple of decades, before being acquired by Tony Ryan of GPA and Ryanair fame in 1985 for use as a showcase for Tipperary products, later specialising in Tipperary Crystal. Browsers opened a furniture store here in 2003, before it took on a new lease of life under Coffee Culture in 2015.

5. Community Park
Birdhill’s Community Park, sponsored by the local Credit Union, was opened in 2003. The varied landscaping from formal cultivation to wilderness offers a wide educational resource and provides wonderful habitats for numerous species of wildlife. A flower-fringed water fountain, installed in 2007, stands at the bus stop on the nearby roadside. Among the attractions in the Park are a Fairy Trail, an Autism-Friendly Play Area, Children’s Play House, a Mural of Oisín & the Bird.

6. The Co-op Creamery
Built in 1914, the Co-Op Creamery was once an important social and economic focal point for the local community, serving over 100 dairy farmers. The original creamery is now gone but the milk churns in front of the building and the murals by local artist Ann Barry recall its past.

7. Railway Station
Opened in July 1860. A rail link to Killaloe operated up to 1944. The remains of the old turntable and water tower are still visible where the line diverted to the lakeside town. The original cut stone bridge forms an attractive entrance to the station.

8. Carrigeen Rock (private land)
Overlooking the village from the south-east is a prominent sandstone outcrop known as Carrigeen Rock, which features in the legends of Birdhill’s placename and where Oisín is reputed to have kept the hunting horn of the Fianna.

9. Ormsby Bible School
The house (now a private residence) at the top of Twiss Hill was opened as a Bible School in 1824 and was the centre of national controversy in 1827 when 20 families were evicted from the Ormsby Estate for refusing to attend the school.

10. Church of Our Lady of the Wayside
Birdhill Church, a sandstone structure with cut limestone inserts and remarkable architectural design and detail, was opened in 1871 at a cost of £1,200. The site was originally a pond given by local landlord George Twiss. The Stations of the Cross, installed in 1927, are a unique chalk creation and were funded by local families. In 1957 the church was completely refurbished and dedicated to Our Lady of the Wayside.

11. Kyle Graveyard
The Kyle was the former cemetery for the Birdhill area, given by the Ormsby family as a burial ground in the 1820’s and was much used for burial during the famine. It was part of the original Ormsby mansion, known as Courtwood.

12. Twiss House (on private land)
For most of the 19th and the early years of the 20th century the Twiss family owned much of the land around Birdhill. The house, on the hillside between the Limerick and Newport roads, is now a ruin, having been burned down in 1920 during the War of Independence. Previously, Birdhill Castle (Knockananean), built in the fourteenth century, stood on the same site. The grave of Bob Twiss (1856-1917) can be seen on the lands near the top of Chapel Hill.

13. The Pollaghs
The Pollaghs (in Irish Pollacha, meaning full of holes) is an area of low-lying meadowland consisting of over 200 acres. Approximately 40 farmers received plots of land here when the Twiss Estate was divided by the Land Commission in the early 1900’s. In recent years much of the land has been planted with fast-growing conifers. The Pollaghs featured in the Land War of 1881 when a large group of ‘Emergency Men’ arrived to break a boycott of hay harvesting. Evidence of Viking settlement was uncovered here during the course of the Shannon Scheme in the 1920’s. The Pollagh is now a wonderful habitat for numerous species of flora and fauna.

14. Standing Stone (on private land)
Identified on the O.S. maps as a Legaun, this 6 feet high standing stone at Coosane is usually known as a Gallán.

15. Parteen Weir
The Weir was constructed during the course of the Shannon Scheme in the mid 1920’s to control the flow of the Shannon waters into the Ardnacrusha power station. Adjacent to the weir is the ESB Fish Hatcheries.

16. The Pike
Cranduff Bridge forms the boundary between Tipperary and Limerick. It is known locally as The Pike, having been the site of one of the toll gates on the Nenagh – O’Briensbridge turnpike road established in 1779.

17. Kingstown
This nineteenth century village between Ballyhane and Annaholty grew up around a peat factory established by William Malcolmson. A railway siding facilitated the transport of turf until the business collapsed in 1877.

18. Birdhill School
The present primary school was built in 1964 and an extension was added in 2008. Previously the nearby 1891 building, now serving as a community hall, was the place of education for generations of local children.

19. Cragg Castle
Cragg was the seat of the O’Mulryan clan, members of which flourished during the reign of Queen Elizabeth 1. Across the road, stood the home of the Going Family, landlords of Cragg up to the early 20th century.

20. Cragg Graveyard
This old graveyard is still used by families in the Cragg area. Kilcommenty Church, former parish church for Birdhill, built in 1470, stood here. St. Comenath’s Well, associated with an early Christian hermit can be seen at the entrance and in an adjoining field is St. Comenath’s Bed, a large irregular block of sandstone known as a bullaun.

21. Kilmastulla Graveyard
Site of church used up to the 1950’s and graveyard still occasionally used. It served both Catholics and Protestants at various times. The grave of Rev. D. O’Brien one of the Knights of Malta who served as a chaplain to King Louis XVI of France can be seen here. Bourne’s stables used by Bianconi coaches in the middle of the 20th century stood across the road, while Cnoc na Croíce or Hill of the Gallows (known locally as a Croppy Grave), used by local tyrant Mac I Brien around 1738 was to the rear.

22. Dunally Line
The R 496 to Ballina is known as the Dunally Line, named after Baron Dunally (Henry Prittie) of Kilboy House, Dolla, who ordered its construction in the early 19th century.