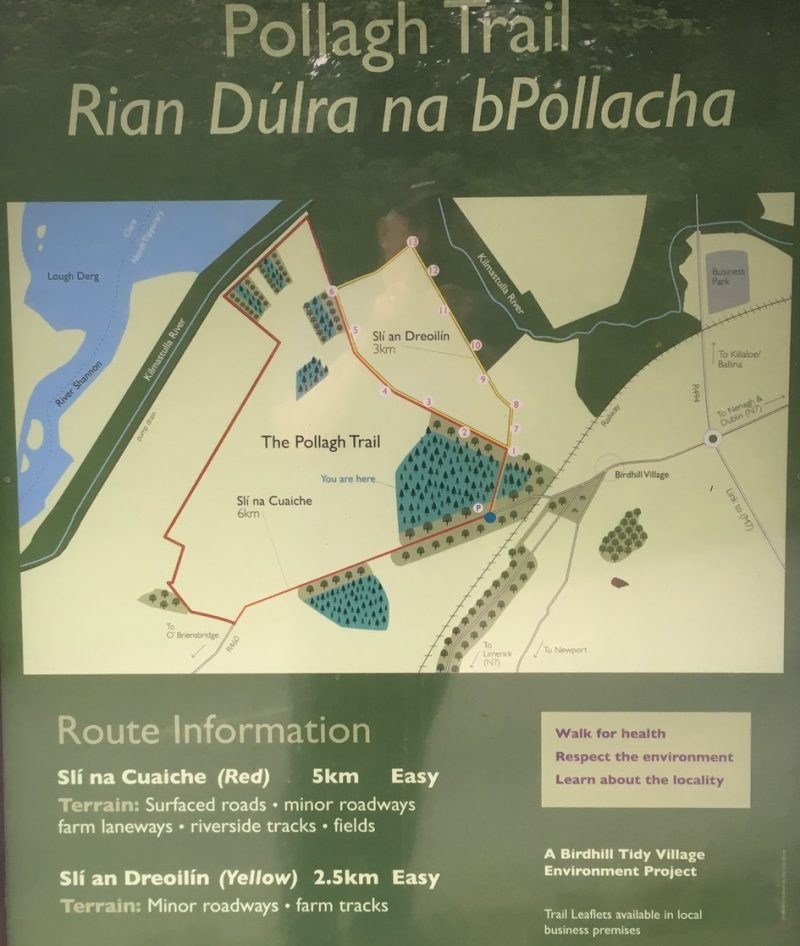 For a quiet, peaceful retreat, away from the busy thoroughfares, take a walk down the Pollagh Trail. This 3 kilometre walk winds through an area of low-lying meadowland. Find out some of the historical, environmental, geographical and social heritage of the area.
The trail commences 300 metres from the village on the O’Briensbridge road, just past the railway station. Information leaflets are available.

The 200 acres of land in the Pollagh served as meadowland to 45 local farmers since the Land Commission divided the estates of the Twiss, Henry and Waller families in the early 1900s. Much of the land has been planted in recent years, with fast-growing conifers more productive in the prevailing soil.

1. The Ash (An Fhuinseog), Elder (An Trom) and Ivy (Eidhneáin) all feature at the first marker. Recognisable through its long straight trunk, distinctive black buds in winter and bunches of fruit (keys) in autumn, the ash is strong and durable and is the traditional wood for making hurleys.
The elder’s fragrant flowers attract birds and insects and its autumn berries are used in wine-making. Its soft stem can be hollowed out to make whistles.
The ivy is a common creeping evergreen vine with poisonous leaves and berries.

2. The Beech (An Fheá) is an impressive tree with a spreading crown. It keeps its withered leaves over the winter and is a popular hedging tree in modern gardens. Its smooth, fine-grained wood is used in furniture-making while beech mast (nuts) has a high fat content attractive to birds and animals.

3. The Holly (An Cuileann)
The Holly with its clusters of red autumn berries is a familiar Christmas decoration. Being shallow-rooted and shade-tolerant, it thrives here under a large oak. Traditionally, the holly was considered one of the most sacred trees by the druids of Ireland. The evergreen holly was the ruler of the dark winter months, while the oak ruled the summer. The male holly bears berries.

4. The Sycamore (An Seiceamair)
Sycamores, with their distinctive maple-like leaves, are easy to grow and thrive in lowlands. Their helicopter-winged seeds ensure they find favourable conditions for proliferation. Favoured by birds, their summer canopy also provides a valuable shelter for livestock from rain and sun.

5. The Willow (An Saileach)
The willow thrives in damp soils and grows in profusion in the Pollaghs. The Sallow Willow or ‘Sally’ abounds here but Goat Willow and Pussy Willow are also plentiful, producing an abundance of catkins in April and May. The young branches of the willow were once woven into baskets and wicker chairs and were used in thatching by local craftsmen.

6. The Birch (An Bheith)
Rows of Birch trees have been planted in the field adjoining the pathway which leads the walker from the roadway on through the Red Loop. The Downy Birch is common in poor soils and is tolerant of wet sites. The springtime flowers are catkins which stay on the tree and contain the mature seed by autumn. Birch is commonly used in making plywood.

Continue the Nature Trail by returning to cross the linking path to the other leg of the Pollagh Road.

7. The Oak (An Dair)
Oak woods once covered large areas of the Irish countryside, producing many placenames. Slow-growing but long-living, the great oak can span several human generations and reach heights of up to 45 metres. The oak produces acorns in autumn, supports a diverse and abundant wildlife and is used in the making of furniture.

8. The Elm (An Leamhán)
The Wych or Irish Elm is flourishing here. Recognisable by its large, short-stemmed leaves, it produces clusters of red bell-shaped flowers in March. Many insects are attracted to the elm – one particular beetle is responsible for spreading the Dutch Elm disease which has wiped out elms in recent years.

9. The Hawthorn (An Sceach Geal)
The young whitethorn turns the hedgerows white with its scented flowers in late spring followed by red berries (haws) in the autumn. The hawthorn is traditionally associated with the fairies, so people are reluctant to interfere with it.
A Blackthorn (An Droighneán Dubh) stands on the opposite side of the road, with a similar flowering pattern to the hawthorn but with purple sloes in autumn. The traditional Irish ‘shillelagh’ (stick) is made from blackthorn.

10. The Alder (An Fhearnóg)
The alder, typical of wet land, has distinctive long yellow and purple catkins in springtime. Small cones contain seeds. It has been used for making clogs and also in the furniture trade where it was known as ‘Irish mahogany.’

11. The Brambles (Na Driseacha)
The common bramble or briar is an intrusive plant covered with sharp thorns. They frequently root along the ground when they touch it. Abundant blackberries are produced in autumn, a free raw material for jams, jellies, cordials and pies, and an important food source for wild birds.

12. The Dog Rose (An Rós Fiáin)
The wild rose, growing on the opposite side of the trench, with ash-like leaves and long arching stems bearing curved thorns, is a scrambling hedgerow shrub. It produces rose-scented flowers in summer followed by bright red rose hips in autumn.
Across the field to the east, is a Special Area of Conservation following the course of the Kilmastulla

13. Kilmastulla River (An Uinse)
The Kilmastulla, an important salmon spawning river, is also home to the river lamprey, a protected species under the EU Wildlife Habitats Directive.
To the north-west, the Clare Hills form a backdrop to the Shannon embankment which was built to raise the water level in the river for the hydroelectric power station at Ardnacrusha in the 1920s. The Kilmastulla River originally flowed straight into the Shannon but was rerouted during those pioneering works to turn and run parallel to the Shannon for over 2 km before the rivers meet at the specially-constructed weir which controls the flow and level of water. Since the water level of the Shannon is now higher than the surrounding Pollagh lands, drainage is dependent on a series of pumping stations, so there are now three water courses side by side – the pump drain, the Kilmastulla and the Shannon.

14. Mountains all round us (Na Sléibhte)
The hills to the north-west, across the River Shannon, are Slieve Bernagh (called the ‘Clare Hills’ locally). Tountinna and the Arra Montains lie to the north-east on the Tipperary side of the Shannon. Silvermines Mountains and Keeperhill are visible to the east, while SSE, overhead Birdhill Village is the original ‘bird hill’. Hidden by bushes near the top of the hill is a prominent sandstone outcrop called Carrigeen Rock, which features in the legends of Birdhill’s placename, Oisín having kept the great hunting horn of the Fianna hidden there.

15. Sitka Spruce (An Sprús Sitceach)
Sitka Spruce, a fast-growing conifer, is the predominant species used in Irish forestry. It grows productively in the moist conditions of the Pollaghs. Felling will be carried out after 30 to 40 years, but thinning will be necessary after 15 years. The timber is traded as ‘white deal’. Sitka Spruce has an important role to play in reducing the levels of carbon dioxide in the atmosphere.
Rows of deciduous trees (oaks and alders in the adjoining fields here) are planted on the perimeter of the spruce plantations to increase biodiversity and enhance the visual appearance. 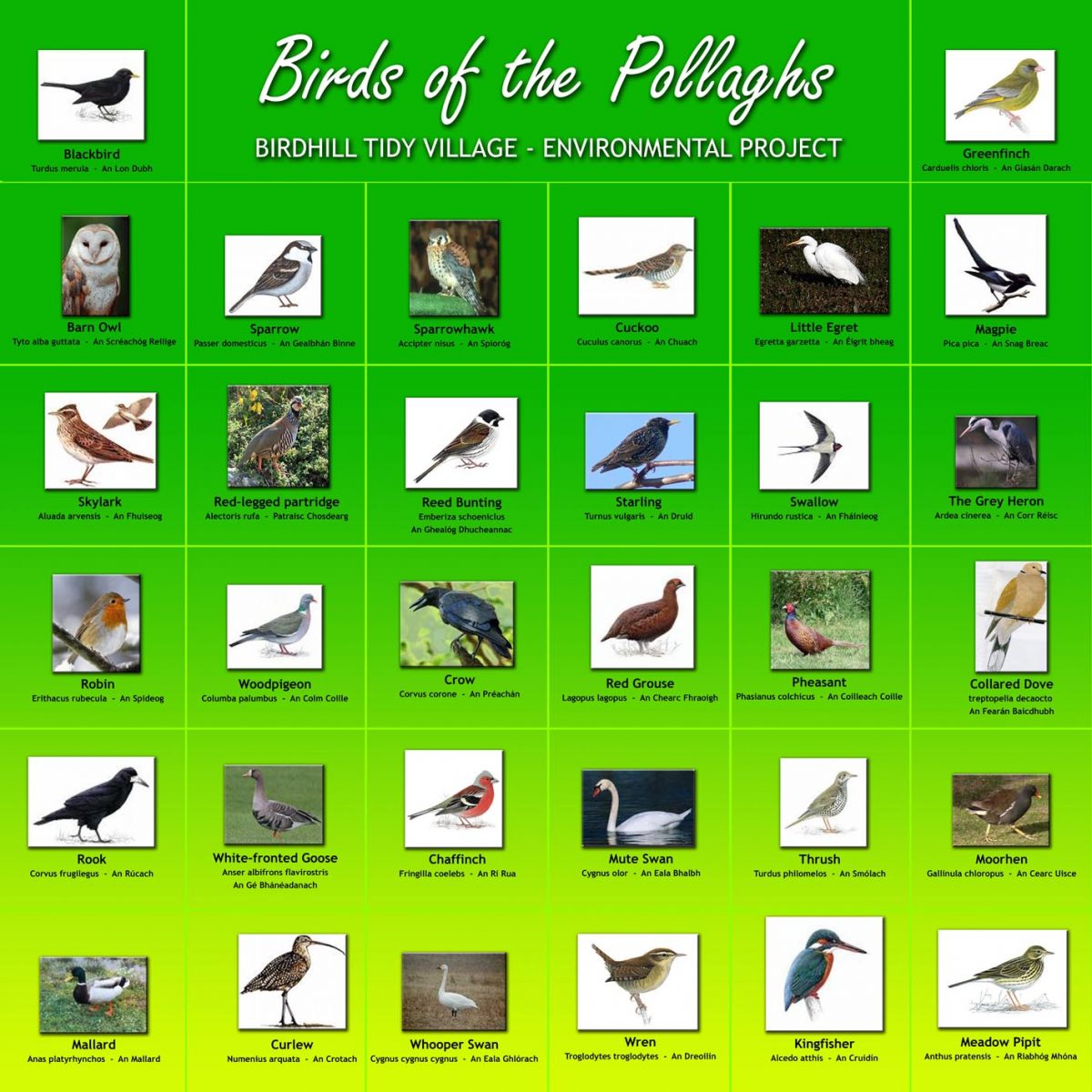 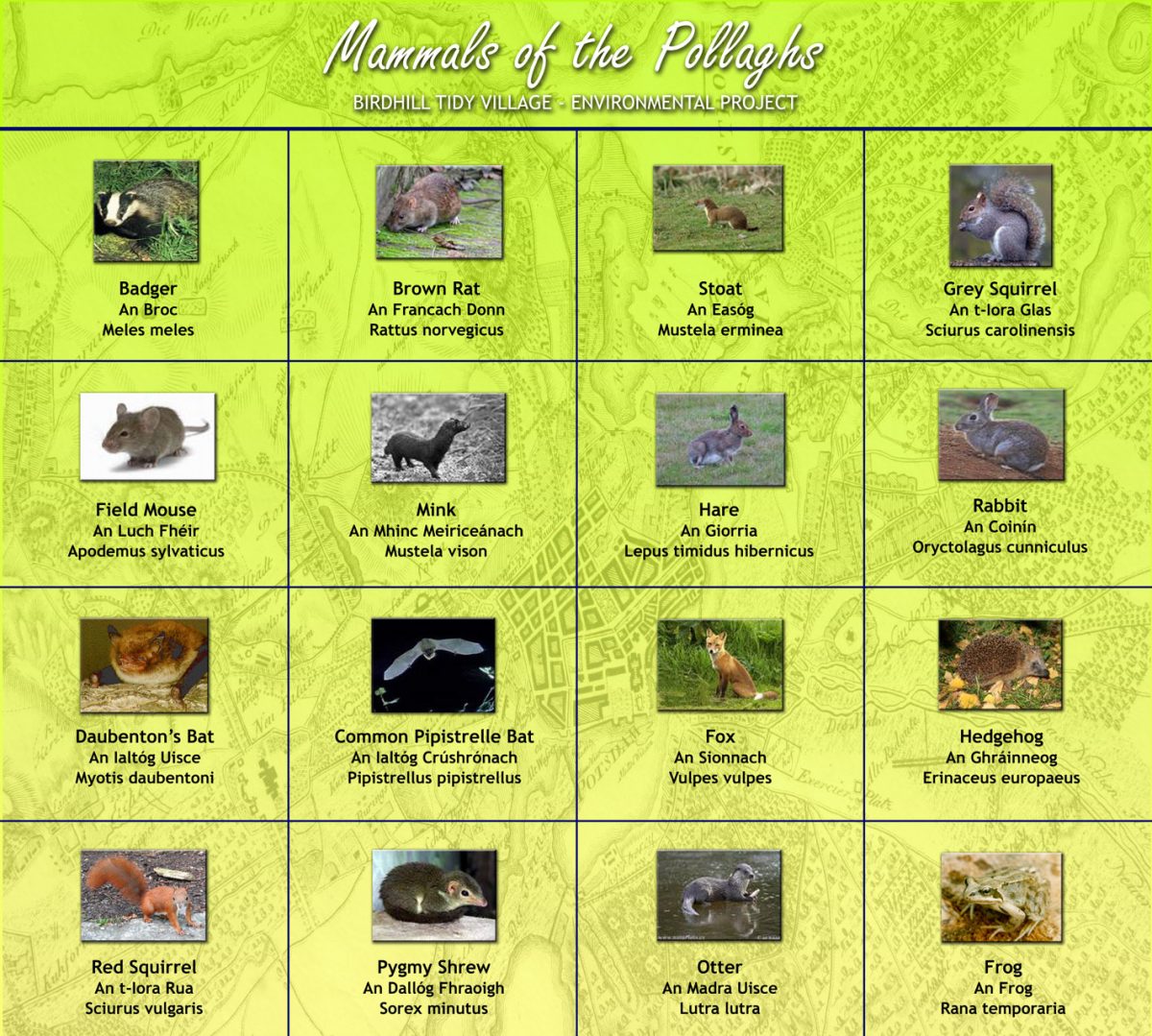 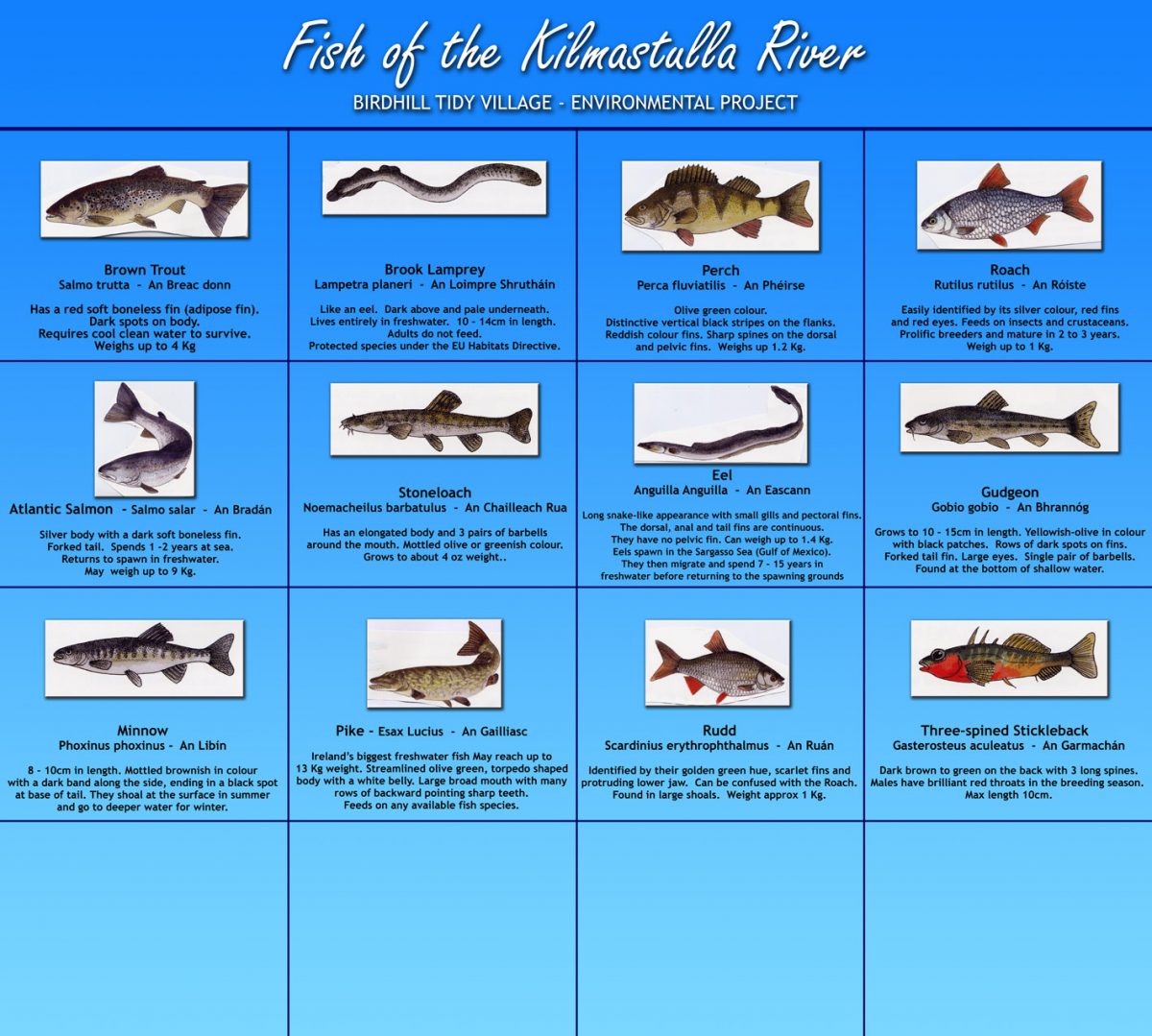 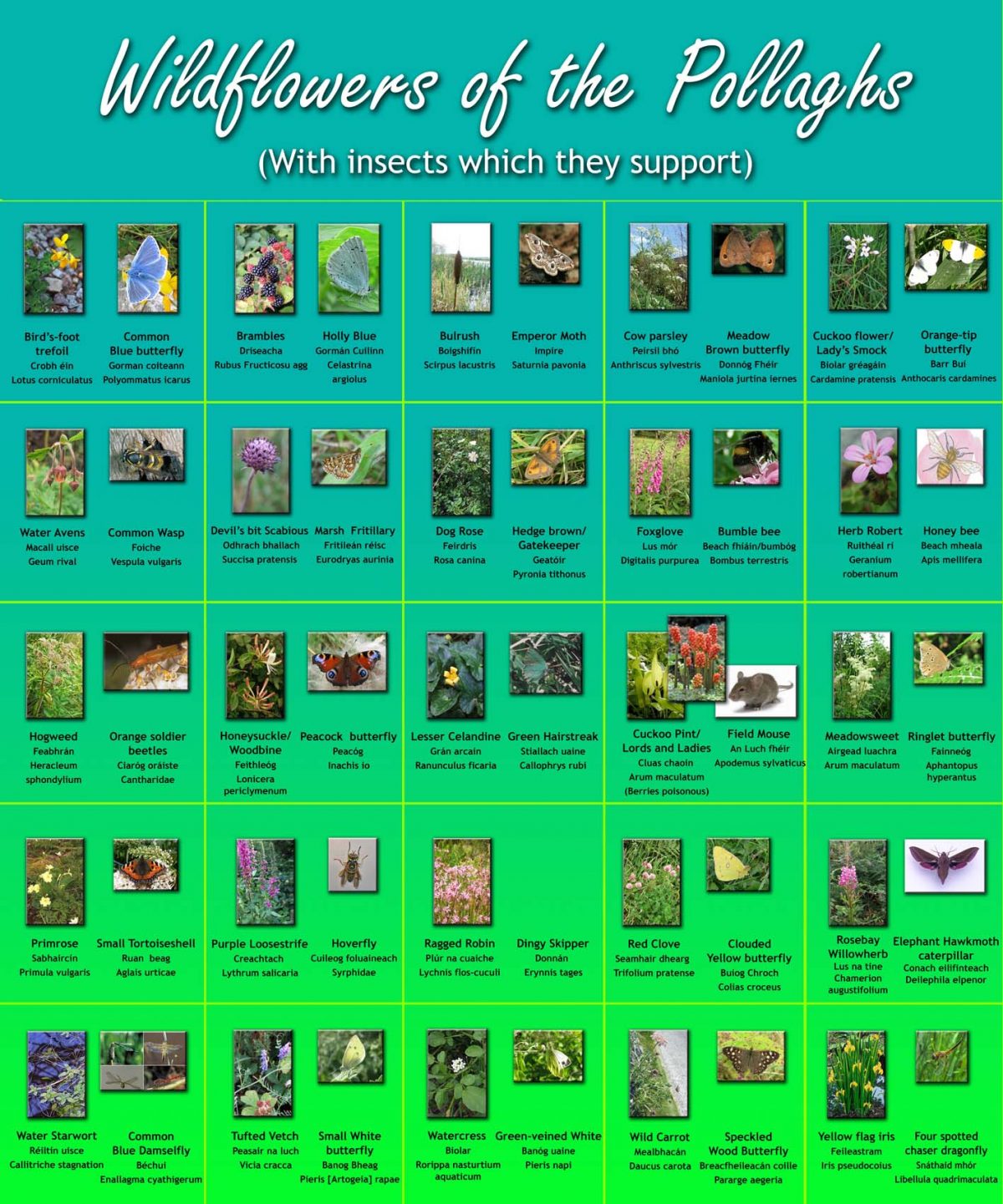