The Newport and Birdhill areas have a great tradition of song-writing and ballad-making.

Read some of the songs about our locality.

(Written by Paddy O’Riordan. Recorded by Sean Boland in 1998)

It’s the nearest place to heaven, where the birds will always thrill
For the angels they have named it,
And they called it Sweet Birdhill

There’s not a nicer place on earth, with lots of things to do,
As you travel on from Daly’s Cross, to lovely Killaloe.
You can call in to The Coopers Bar and sit and drink your fill,
Or be welcome at The Threshers, in the village of Birdhill

Lovely lawns and gardens adorn the roadside there,
Where God has placed the backdrop to the lovely hills of Clare.
When your memories are calling, as you walk down Chapel Hill,
Just step in to your former dreams and visit Sweet Birdhill

When you arrive at journey’s end and you step down from the train,
As you travel past the churchyard on your way to Ballyhane.
The lights will always welcome you, as you pass through the old half door.
And the music, craic and dancing, will be ringing round the floor

When you go down by Tully’s Cross, on your way to old Coosane,
As you ramble down the Shannon Banks when winter days are gone.
Your memories will haunt you and your thoughts will linger still.
As you step into your former dreams, and visit Sweet Birdhill
Close

The winning song, “My Native Place Birdhill” was penned by Johnny Mulcahy and sung by Eileen Briscoe. 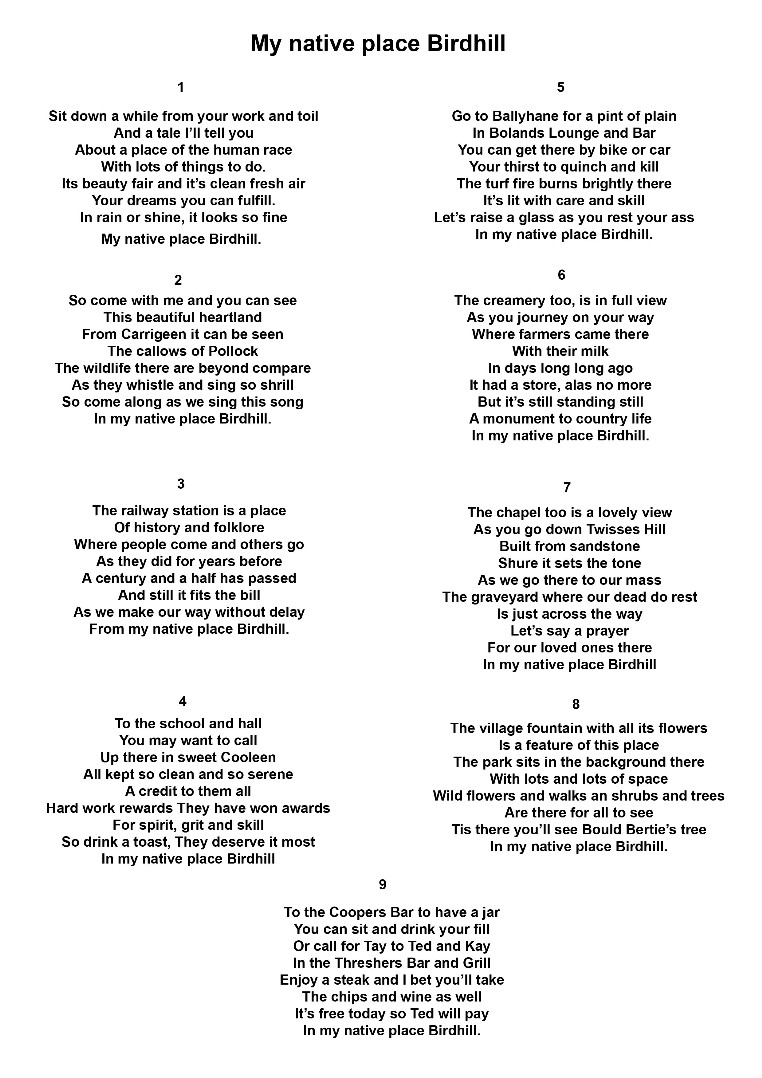 I come from Tipperary, the home of my father, and I never once yearned to roam any further.
I love my own people, my family and neighbours, and that’s why I’m proud it’s my home.
We tilled in the garden, we worked on the farm, trammed hay in the meadows, shure it did us no harm.
We hurled in the Glosh field till daylight was fading, we swam in Coole River all day.

Birdhill my homeland, the place where my life began.
It’s the heart of my childhood, Lower Lacken and Gortybrigane

On Sundays we prayed in our church by the roadside, majestic and tall she’s Our Lady of the Wayside,
Each day we would walk the two miles to Cragg Schoolhouse, it’s now the Community Hall
At Twiss’s old castle there’s plenty of folklore, on Carrigeen Rock where Oisín made the bird soar.
And down by the railway our station stands proudly, for a century plus fifty today.

Birdhill my homeland, the place where my life began.
It’s the heart of my childhood, Lower Lacken and Gortybrigane

When the hurling games over, to the Coopers we’d wander, we’d puck every ball, the result we would ponder.
We’d dine at The Threshers and sing until dawning, in the Ballyhane ’til the next day.
As a new day is dawning, I stroll thru’ the Pollagh, by the banks of the Shannon all the memories will follow,
As my heart fills with pride for Birdhill and its beauty, a place that is ever so rare.

Birdhill my homeland, the place where my life began.
It’s the heart of my childhood, Lower Lacken and Gortybrigane
Close

MY HOME IN SWEET BIRDHILL

I made my way towards Ballyhane as the dark night on me fell
The silver stars were shining bright as I bid Coosane farewell
Then up on past the village hall where the moon shone all around
And the memories came crowding back when I stood in my old school ground.

And so last night when homeward bound I passed through the village neat
I quenched my thirst in Coopers pub with stout so rich and sweet
The chat was all on hurling and the matches still to play
While the night air filled my senses with the smell of the new mown hay.

The quaint little church by the wayside, slip in for a moment, with God to abide.
The ever-expanding national school, when they raised the green flag, it was so cool.
Into Matt the Threshers, to meet Ted and Kay, where gastronomic food is served everyday.
The sweet-smelling flowers are in full bloom, oh the craic we have in the Coopers’ pool room.

There’s one other pub, Bolands of Ballyhane, where the Tayto Club is its claim to fame.
A stroll round Browsers furniture store, our sporting heroes have won medals galore.
A walk in the garden, gaze at Keeper’s Hill, stop at the fountain, stare at the Clare Hills.
The turning on of the Christmas Tree lights, these are just some of the delights.

The hall with its dancing, concerts and cards, music lessons and sessions, singers and bards.
Our village will be by-passed by a new motorway, but it’s not open yet, because the bog gave way.
Our award-winning village, the pride of North Tipp, living here is cool, it’s really hip.
We admire the murals on the old creamery, as we celebrate the Railways One Fifty. 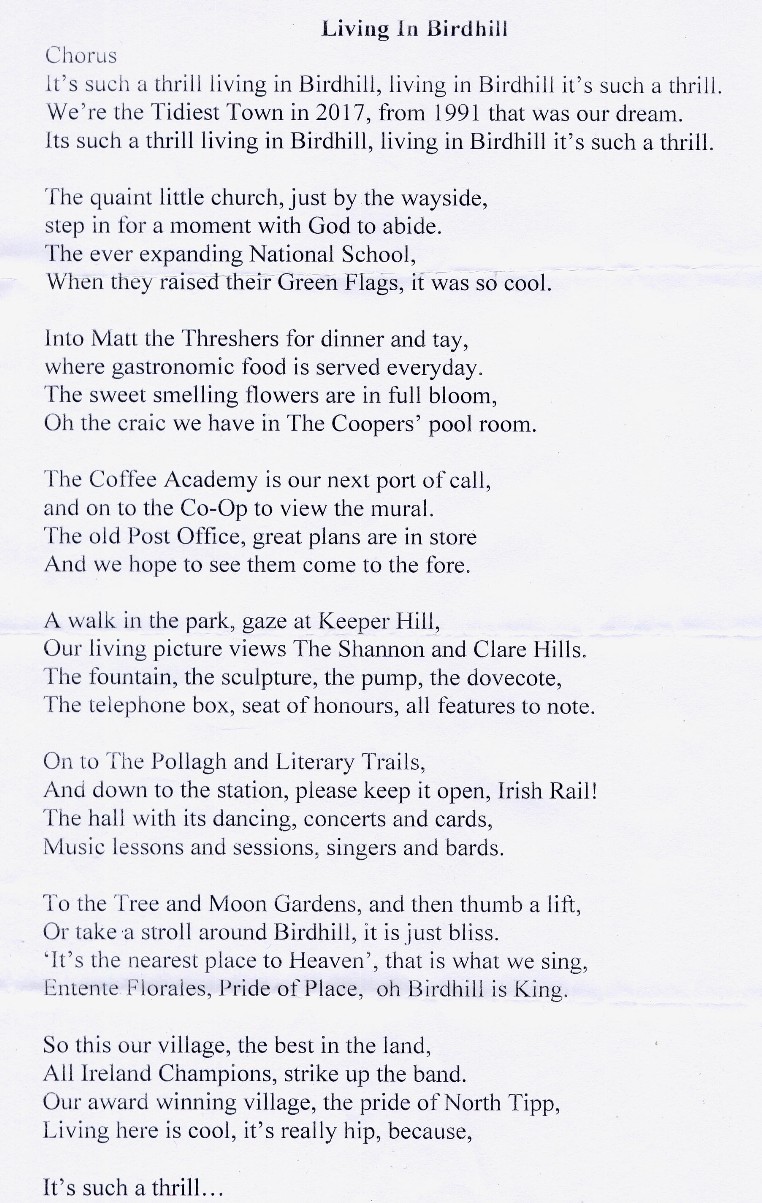 My Love and I went for a stroll
Down Coolnadornory lane
Heading towards the Shannon River
It was calling out our name
On either side of this boreen
Green hedgerows were in bloom
Intertwined with briar and woodbine
It smelled of sweet perfume.

My love and I knelt down to pray
To our Lady of the Wayside
Where we thought about the friends we met
And relations that had died
Tonight we’d have to pack our bags
For the plane it leaves at dawn
Back to our home in America
Little Rock, Arkansas.

Twas a quiet summer’s day
and my thoughts did stray
to earth so green and fields of hay.
I dared not try to keep them still
till I reached the end of the line, and sweet Birdhill

Now there’s a place I love to see
It’s homely touch means much to me
Matts, the Coopers, gardens galore
That glimpse of the Shannon as it wanders o’er

All things bright and shiny too
from the creamery cans to the sign for Killaloe
Where on earth would you find such a place,
A kinder folk, a gentler race
Than those who call, and always will, – their earthly home – sweet Birdhill 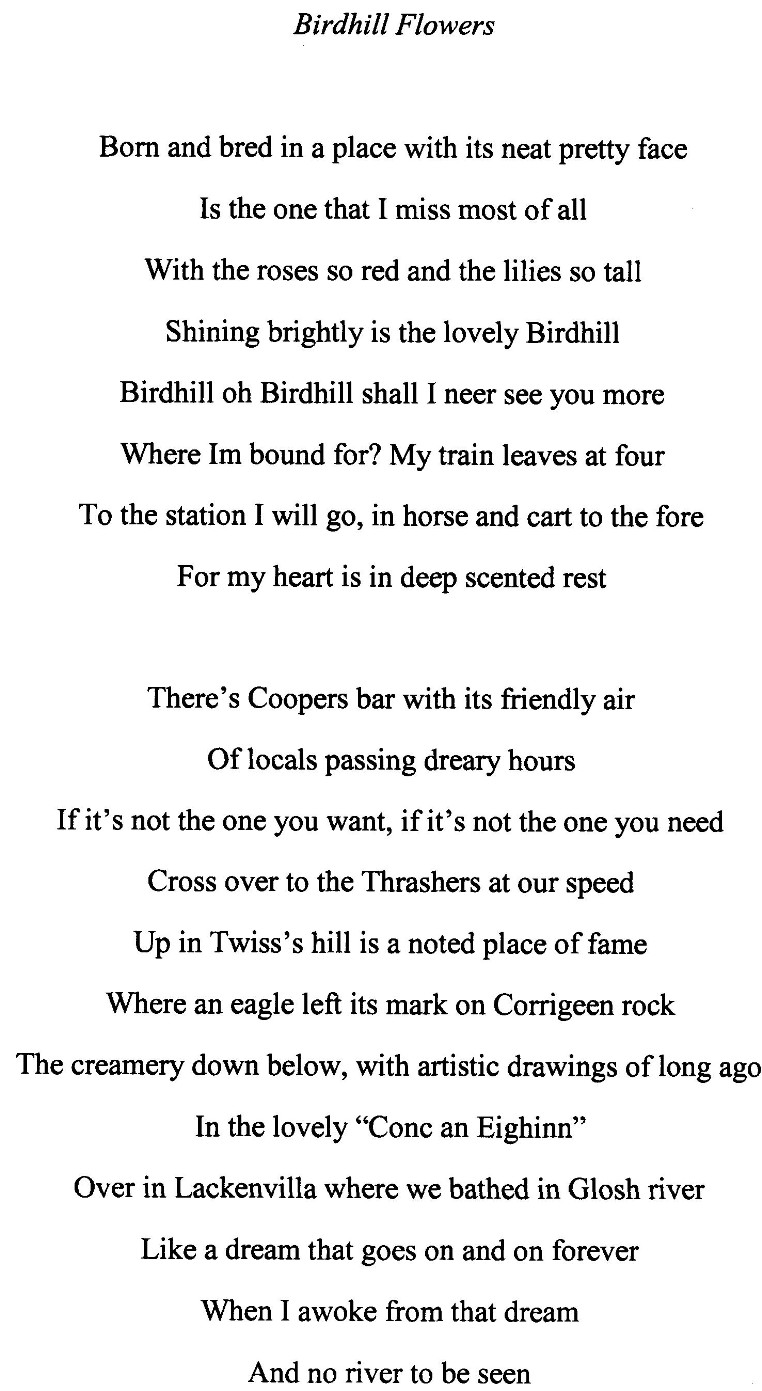 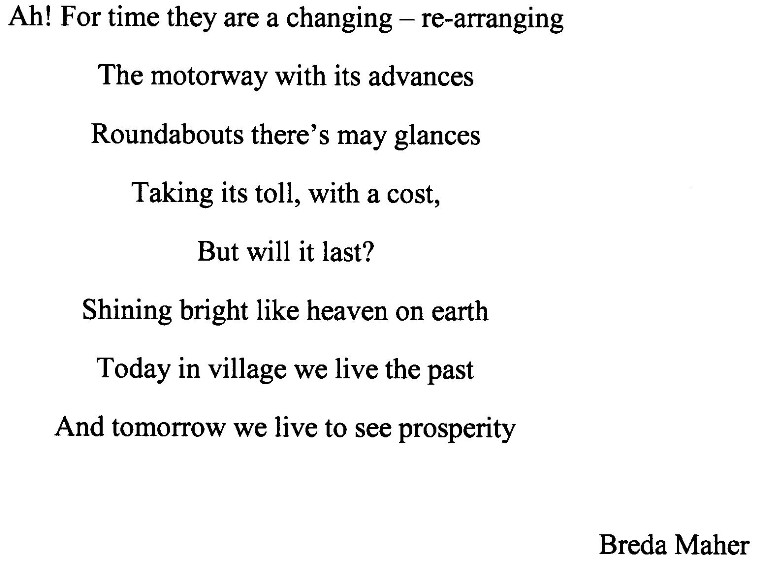 How oft my thoughts return to the scenes around my home,

The wooded groves and hillside paths where I was wont to roam,

The low-lying plains and bogland where the sweet birds sing their fill,

‘Ere the purple shades of twilight fall on the village of Birdhill.

From the ancient rock of Carrigeen you can view the country wide,

From Ormond on to Thomond by storied Shannonside,

And the heathered slopes of Arra, towering high beyond Birdhill.

The dying smile of sunset in the soothing evening air,

Fades behind Slieve Bernagh and sinks down the hills of Clare;

The softening shadows creeping down the vale from Keeper Hill

Spread the balmy peace of nightfall o’er the village of Birdhill.

Where Oisín of the Fianna came back in days of yore,

And grappled with the great rock, then took a sudden spill;

He lies buried with his trumpet ‘neath the stone above Birdhill.

The Castle of Cragg-Owney, once the fortress of the Ryans,

Its ivied walls and transoms in ruined splendour lies.

The regal gates of Shannon Lodge, though blemished, standing still,

Recall the Ormsby stronghold near the village of Birdhill.

The Holy Well of Commenath in the dusk a vision calls,

And the ghostly tread of footsteps echo round the churchyard walls.

No more they file along the path, to cross the little rill,

It’s a custom long forgotten near the village of Birdhill.

Where we played in happy childhood near the village of Birdhill.

To the Red Bog up in Cregough where I spent many a day.

Ah, lonely is the exile’s lot, his life a bitter fill,

When he knows that he will see no more, the village of Birdhill.