Visit and see some of the unique attractions in Birdhill 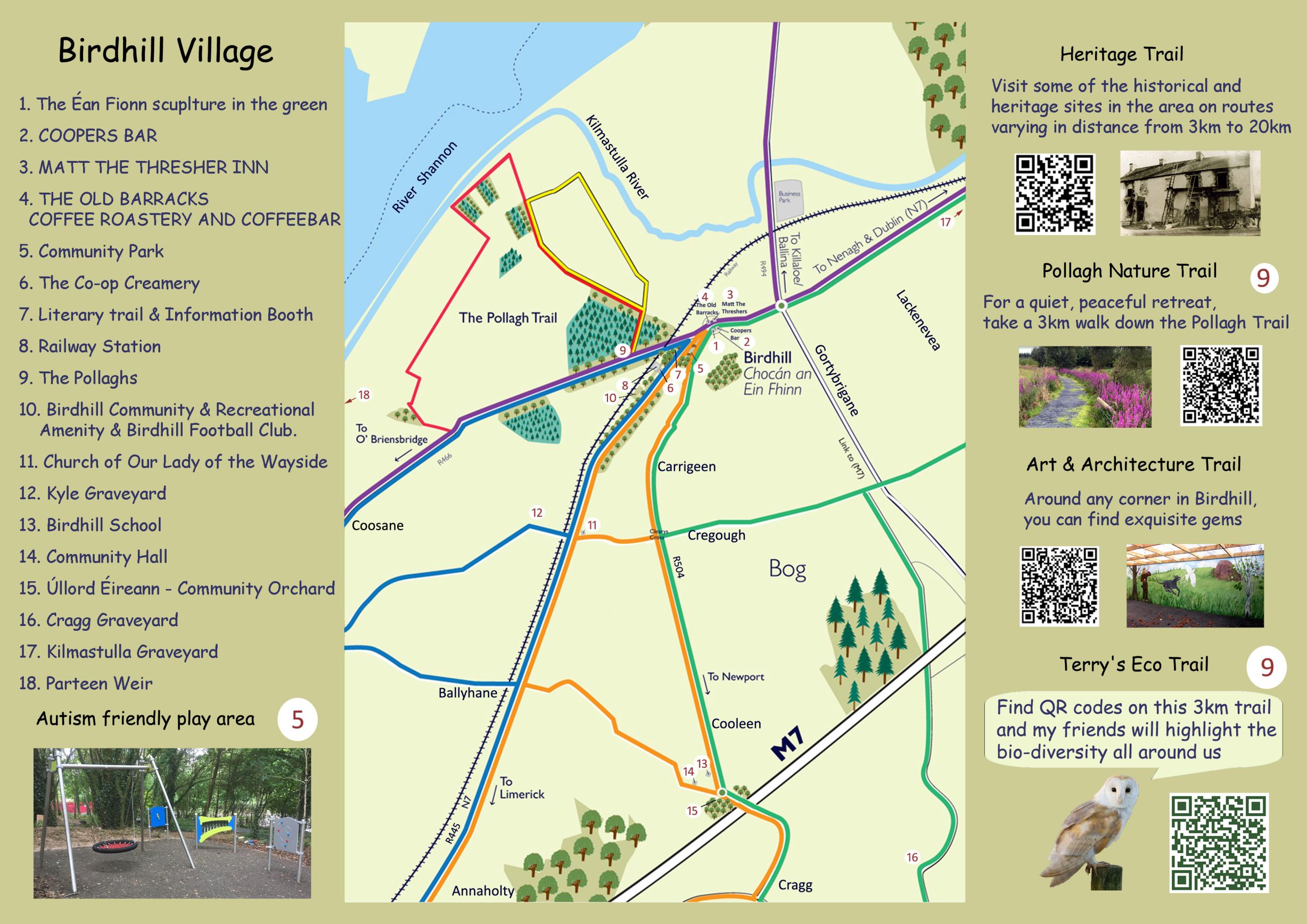 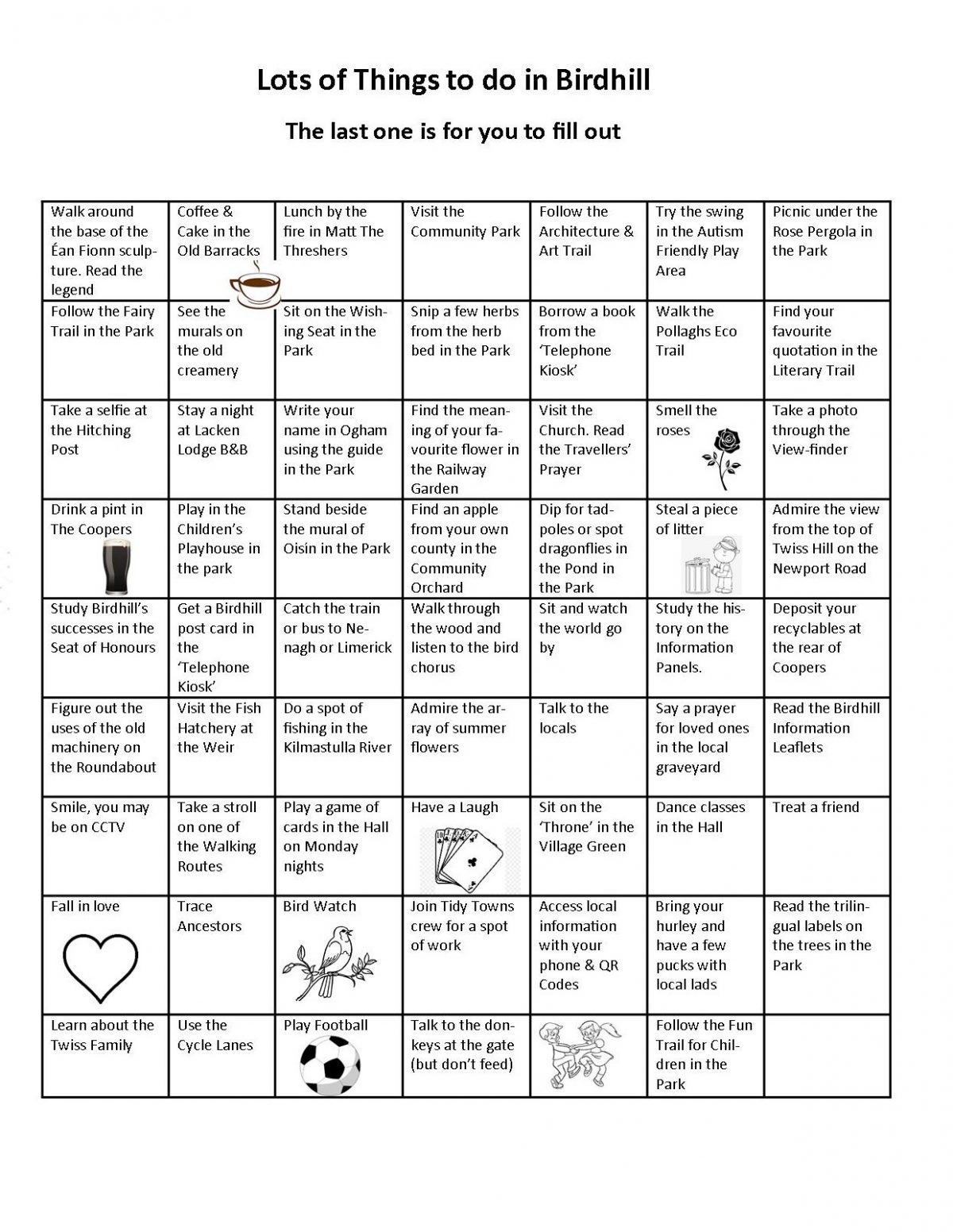 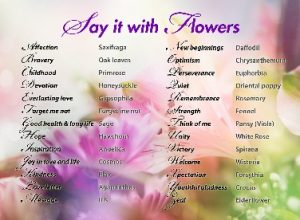 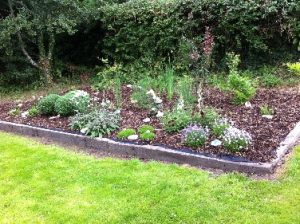 In 2014 an ‘Alphabet Garden’ was created at the Railway Station. ‘Say it with Flowers’ attaches various emotions and characteristics to many common flowers and plants. 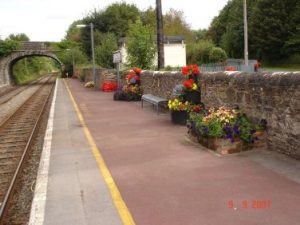 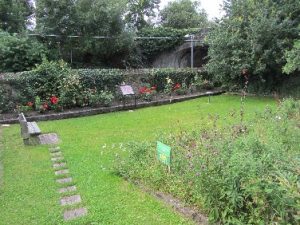 Birdhill Railway Station was opened on 23rd July 1860. 150 years later, it still retains much of the old world charm of those bygone days. The station-master’s residence and the nearby junction for the branch line to Killaloe with the adjacent water tower and turntable are long gone. But the arched bridge, the signal box, the entrance gate and the stone walls help to maintain the character of a past era. A garden has been newly developed in the grounds to commemorate the 150th anniversary. 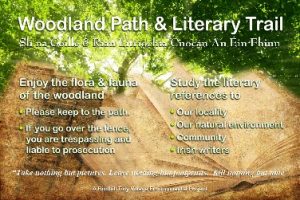 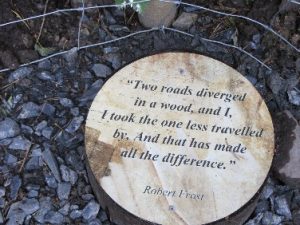 A new feature was opened in Birdhill Village in August 2012. A path was laid through an existing wood and a series of quotations installed, providing an educational, environmental and recreational amenity.

In 2002, a stainless steel sculpture, six metres high was erected in the Village Green in Birdhill, recalling the legend of how Birdhill got its name. The sculpture is entitled The Éan Fionn (the white or fair bird). The commission for the design was awarded to John O’Connor from Waterford following an open competition. The sculpture, depicting a great wounded bird, with broken wing, is a modern representation of an ancient tale. The legend is related on the plinth of the sculpture as follows:

The Éan Fionn of Birdhill is linked in local folklore to a story of Oisín, son of Fionn Mac Cumhaill, and Saint Patrick. After his return from Tír na nÓg, a hungry Oisín was trying to convince the sceptical saint of the great appetites of the Fianna. To prove he spoke the truth he set out one day with his dog Bran Óg to find a giant bird. When they came to Birdhill, Oisín took the famed hunting horn of the Fianna from under the Carrigeen rock near the top of the hill and sounded its thunderous note. Immediately, flocks of great birds descended on them but the dog drove them all off. Finally one enormous bird attacked, but Bran Óg, after a titanic struggle succeeded in killing it. Oisín cut off a leg of the giant bird and took it back to Saint Patrick, along with a huge rowan berry and a great ivy leaf taken from the woods of Ballyvalley, near Killaloe. The saint never doubted Oisín’s word again and never left him hungry from that day on 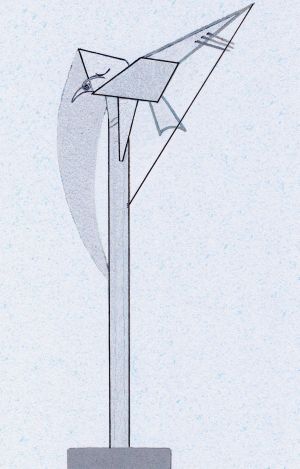 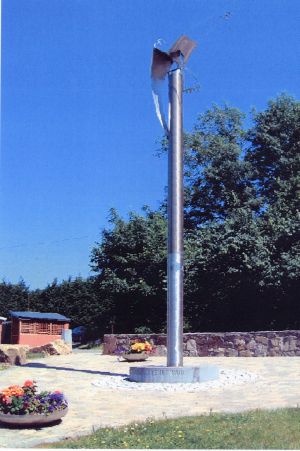 For a quiet, peaceful retreat, away from the busy thoroughfares, take a walk down the Pollagh Trail. This 4 kilometre walk winds through an area of low-lying meadowland. Find out some of the historical, environmental, geographical and social heritage of the area.

The trail commences 300 metres from the village on the O’Briensbridge road, just past the railway station. Information leaflets are available.

An online Eco Trail has also been developed, inviting visitors to access information through QR Codes on their mobile phone. 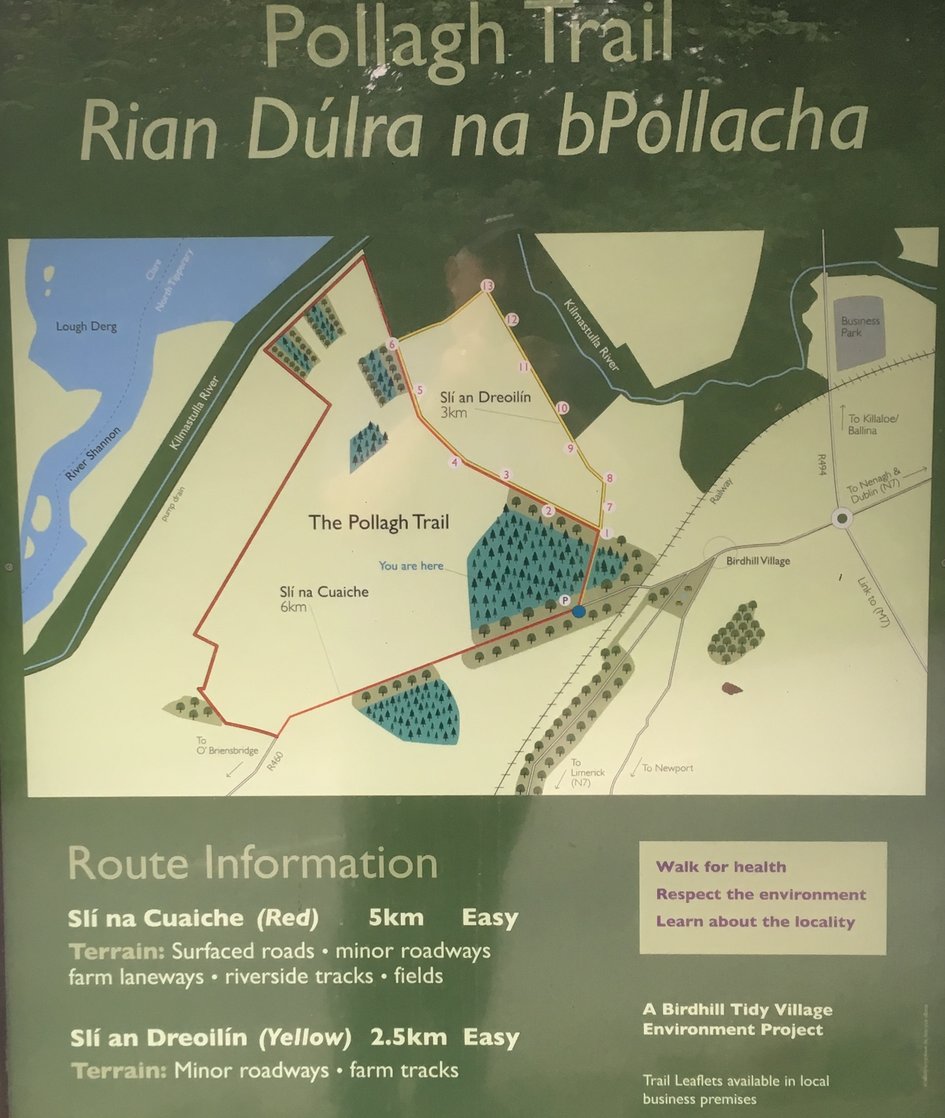 In August 2006 local artist, Ann Barry painted 2 murals on the facade of the old Co-op Creamery in Birdhill. They depict a typical scene from a dairy farm of bygone years, most appropriate to the area and the building which they adorn.

The summer of 2007 brought a big change the area of the bus stop on the Limerick Road. A fountain, with stone wall and paved surrounds, was constructed to give a spectacular vista to passers-by and a relaxing haven to those awaiting the bus 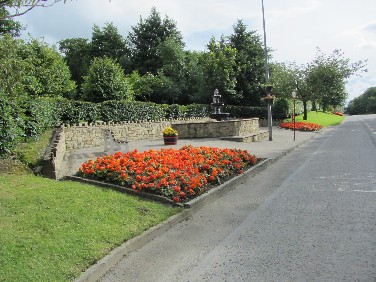 Pairc an Éin Fhinn was opened in 2003 to provide a recreational and educational amenity for the area. It was developed by the local community on a piece of land owned by North Tipperary County Council. The amenity has matured over the years as an important community facility, bearing in mind the constraints on availability of personnel and finance and the long-term maintenance requirements. 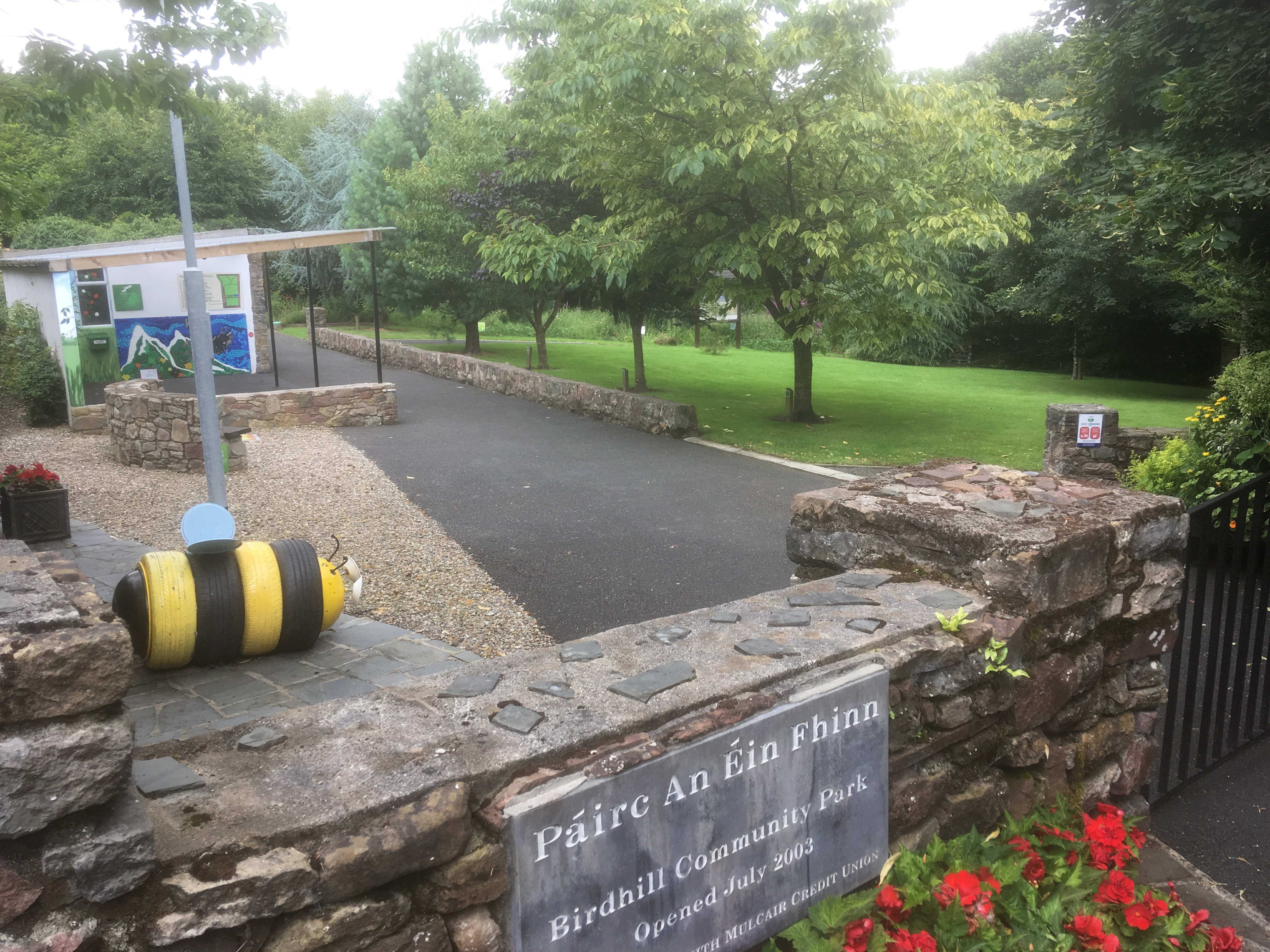 The main elements of the Páirc are:
Stone wall and paving around the entrance, reception area and shed
A large open lawn planted with some decorative trees
400 metres of gravelled paths
A small Wildflower meadow
Gairdín na bPáistí and Faiche an Phobail where local children and families planted trees
Some mature trees which were transferred from the Village Green and other areas
Items of rustic furniture installed to facilitate seating, picnics, etc
An Information Board showing a representative depiction of the Flora & Fauna of the area. This was produced in conjunction with an Information Leaflet and the establishing of a Nature Trail in the Pollagh
Name plates on a wide range of trees
A tree planted by Taoiseach Bertie Ahern in October 2006
A pond installed in 2008 to further enhance the wildlife potential of the park
A small herb garden, mostly planted by local children
A reconstructed well and gate as a memorial to the Twiss family
A newly developed hedgerow planted by members of the community.
A map giving details of ‘what to see’ in the park
Specially constructed habitats for different forms of wildlife
An Ogham Garden with samples of an ancient Irish Tree Alphabet
In 2014, a shelter was installed and a mural depicting the legend of ‘Oisín agus an tÉan’ was created
In 2016, a Children’s Playhouse was constructed
In 2017, a Fairy Trail and a Creative Bird House Trail were added
In 2018, an Autism-Friendly area was installed.

The provision and development of Páirc an Éin Fhinn has been undertaken and financed by Birdhill Tidy Village Committee. This has been made possible through various fund-raising activities and welcome donations from a number of businesses. Mulcair Credit Union have generously committed to supporting the initiative on an ongoing basis. Tipperary County Council has also grant-aided a number of projects in the Park.  Future generations of Birdhill people will benefit from the ongoing development of the Park as it continues to mature