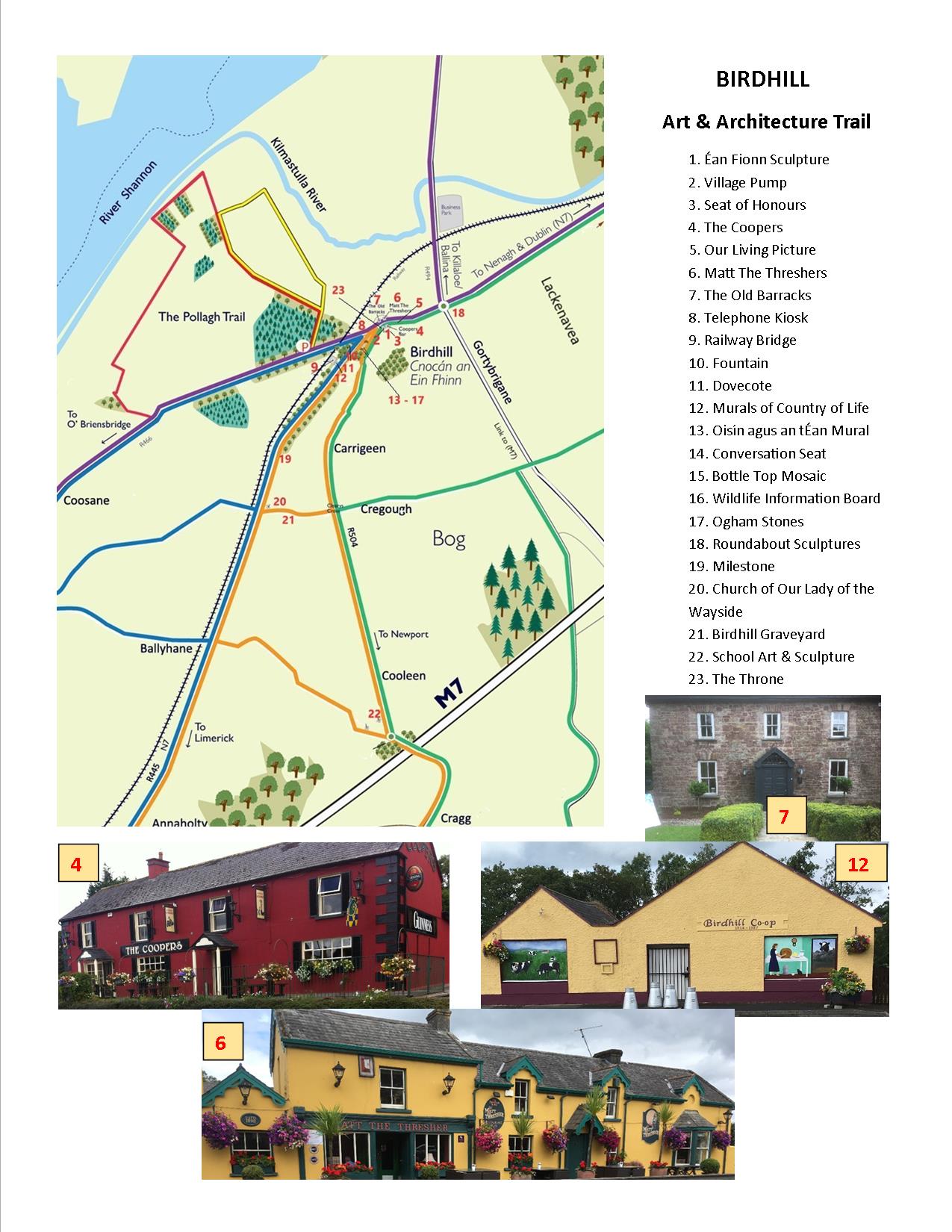 1. Éan Fionn Sculpture
The Stainless Steel Sculpture of a bird with broken wing on the Village Green was erected in 2002. Designed by John O’Connor from Waterford following an open competition, it recalls the legend of how Birdhill got its name. The legend is related on the plinth of the sculpture.

2. Village Pump
The cast-iron water pump installed on the Village Green dates from c. 1870. The artistic detail in its design is seen in the banded cylindrical shaft, fluted domed cap with pointed finial, fluted spout and elegantly curved pumping handle. Water pumps played an important social and functional role in the nineteenth and twentieth centuries, by providing a communal water source. (Listed in the National Inventory of Architectural Heritage)

3. The Seat of Honours
The cart-like granite seat adjacent to the Coopers has details of many of the honours won by the village and community.

4. The Cooper
The Cooper’s Bar takes its name from the traditional craft of the Ryan family, proprietors of the business since 1985. The cooper’s trade (barrel making) is depicted in a window mural by Anne Barry on one of the outbuildings facing the adjoining car park.

5. Our Living Picture
Located to the east of Matt The Threshers, the picture frame, created by local engineer, Sean O’Brien, highlights the view from Birdhill Village. Take a moment to look through the frame and admire the River Shannon, the Clare Hills and the surrounding landscape. Why not put yourself in the picture!

6. Matt The Threshers
Detached multi-phase house built c. 1890, now used as a bar and restaurant. It comprises of a four-bay two-storey block with gablets to first floor and canted bay window to ground, with slightly higher single-bay block to west end with shopfront, and connected to three-bay two-storey former coach house by means of a single-storey block. A carriage arch links to the former coach house with stone steps to the upper floor. The stepped roofline, sash windows and carved timber bargeboards add interest. (Listed in the National Inventory of Architectural Heritage)

8. Telephone Kiosk
The first Telephone Box installed in Ireland was in Dublin in 1925. More than forty years later, Birdhill got its own public phone box (Telephone No. 061-379144), located at the Co-op Creamery and opening a link to the outside world. The arrival of the mobile phone saw the demise of the telephone box, but Cathal Glynn’s replica, erected in the village in 2015, provides a modern useful service as an information hub and an open community library.

10. Fountain
In 2007, a fountain was installed at the Bus Stop, with surrounding stonework by Mike Ryan and paving by Brian O’Hagan

11. Dovecote
The dovecote at the Bus Stop in Birdhill was made by local craftsman, Terry Griffith. It is a free-standing structure for doves or pigeons to roost and lay eggs.

12. Murals of Country Life
The murals on the façade of the old Co-op Creamery were created in 2006 by local artist Anne Barry. They depict a typical scene from a dairy farm of bygone days.

13. Oisín agus an tÉan Mural
Anne Barry, assisted by members of the local Youth Club, created a mural in the Community Park in 2014 to bring to life the story of Oisín’s encounter with the marauding bird, which gave Birdhill its name.

14. Conversation Seat
Built by local stone mason Christy Lynch to mark The Year of the Gathering 2013, the curved seat, of local red sandstone, in the Community Park creates a conversation arc to encourage dialogue and togetherness.

15. Bottle Top Mosaic
In 2011, the children of Birdhill National School created a colourful mosaic from discarded bottle tops. It has been on permanent display in the Community Park since 2013.

16. Wildlife Information Board
A hand-painted board (by Peggy Geraghty in 2003) in the Community Park shows a representative selection of the Flora & Fauna of Birdhill

17. Ogham Stones
An Ogham Garden was created in the Community Park in 2011. The etchings on the upright stones replicate the ancient Celtic writing system. An accompanying explanatory board gives details of an Irish Tree Alphabet.

18. Roundabout Sculptures
The roundabout to the east of the village linking the R445 to Killaloe and to the M7, features a display of refurbished farm machinery, all formerly used for hay-saving in the locality, highlighting the strong tradition of agriculture in Birdhill.

19. Milestone
The triangular-profile, painted stone milestone, on the R445 between the village and the church, dating from c. 1780, is a historical reminder of the era of the coach roads in Ireland. (Listed in the National Inventory of Architectural Heritage)

20. Church of Our Lady of the Wayside
Gable-fronted church built in 1871 of local sandstone with cut limestone to window and door openings and to quoins. Cut limestone belfry on front gable. Lancet windows add to the character. Interior features include a carved timber gallery, arch-braced truss roof, stained glass windows and unique Stations of the Cross cut from chalk. (Listed in the National Inventory of Architectural Heritage).

21. Birdhill Graveyard
Reilig Mhuire Cois Bóthar has been in use as a burial ground for the local community since 1954, replacing the nearby Kyle Graveyard which dated from pre-Famine times. The variety of headstones is remarkable, with some Celtic Crosses particularly prominent. The Celtic or High Cross, a symbol of our Irish heritage, recalls a pre-Christian era of druids and ornate patterns, and the later monastic era of crosses sculpted with biblical stories.

22. School Art and Sculpture Installations
The hurler sculpted from discarded iron at the entrance to Birdhill National School, introduces the visitor to the artistic ethos of the school. Each year the pupils create a piece of art made entirely from recycled materials for installation in the school grounds or throughout the community. Themes vary from year to year and according to the season or curriculum. Creations have included a Mosaic of discarded bottle tops, a Tyre Sculpture, a Bumblebee, etc.

23. The Throne
A sculptural seat was erected on the Village Green to mark Birdhill’s success in winning the overall award in the National Tidy Towns Competition in 2017. Created by Donnacha Cahill of Athenry, the intricate design reflects the difficult, upward journey to the title. A bird’s claw at the top is a nod to the village name. The seat is in limestone, and figures set underneath represent various elements of Tidy Towns work.