CHURCH OF OUR LADY OF THE WAYSIDE BIRDHILL

During the 1700’s the place of worship for the people of Birdhill was a thatched hut near Cleary’s Cross. When the Penal Laws were relaxed towards the end of the eighteenth century a more permanent building was erected on the Twiss lands on the site of the present church. This became the centre of contoversy in 1848, when the lease for the church was up. George Twiss, while willing to renew the lease, wanted to impose certain conditions – no other building on the church grounds and the church to be used for Roman Catholic worship only. At that time churches were often used for many and diverse purposes, sometimes being the venue for political meetings. 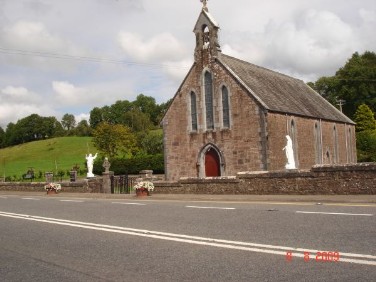 Twiss wanted a legal deed drawn up incorporating his conditions for renewing the lease, but the Parish Priest Fr. Redmond Burke would not agree. A note was placed on the door proclaiming “This Church Closed”. When the priest came to celebrate Mass on Palm Sunday, he had to move to a nearby barn. Twiss eventually signed over the chapel at a nominal rent of one shilling.

This building soon fell into disrepair, however, and in 1861 was demolished to allow work commence on a new church. In the meantime, Mass was celebrated for the next ten years in a long building which had served as a millhouse at Coffeys’ Farmyard (just across from the church). The Coffey family had come from Killeen (Cragg) in 1860, moving into the Badcock residence (a family of Scottish origin all of whom had died out by 1859 – they are buried at Newport). A Statue which had stood in the Old Church was brought to Coffey’s while Mass was being said there. It was left in the house thereafter, and there it still remains to this day. The Statue (of Our Lady) is approx 2 feet tall and it served as a model for the present beautiful Statue of Our Lady of the Wayside, which attracts so many visitors to Birdhill Church. The building in which Mass was celebrated at Coffey’s is now partly demolished, but it stood majestically up to recent years, with the belfry standing proudly on top.

The new Church was opened for worship in 1871. The total cost of £1,200 was collected through the exertions of Fr. John McGrath C.C. The contractor for the building was Thomas Williams, Borrisoleigh and the architect was William Corbett, Limerick. The stone for the Church came from the nearby Thornes Quarry (where the Lahiff residence now stands). The Thornes received the roof of the old church in part payment for the stone.

About the turn of the century, a novel method of generating finance for the church was initiated – families were given the option of purchasing their own pews (seats) in the church at a cost of 10 guineas. All 30 seats in the body of the Church were soon purchased, as well as the seats in the gallery. People were also given the option of making payment over 20 years. The seats were divided into 3 rows, with 2 passages between. The pews did not reach all the way down to the end of the church, so there was plenty of room for standing. It is no surprise, therefore, that so many people became accustomed to standing at the back and never dared venturing further up for fear of being asked to move.

Pews were owned by the following families:

Other Families who had the use of seats for a number of years were: Ryan (Bán), Ballyard, Ryan (Huntsman), Ballyard and Holmes, Ballyard

This arrangement pertained for over half a century and was often the source of some controversy and embarrassment. In the early fifties Fr. Nash was heard to say that the owners of the pews were “suffering from an exaggerated opinion of their own importance”. He also annoyed some people one Sunday when he remarked that “the front pews were dominated by old widows dressed in black”. Canon Mulvihill finally solved the problem.
When refurbishment was carried out in 1957, he replaced the 3 rows of seats with 2 rows, with 1 passage in the centre. The gallery was also shortened. New roadside walls and entrance gates were erected and the Church was dedicated to ‘Our Lady of the Wayside’.

The Car Park was opened in 1965 when Michael Hassett donated the site to the Church.

The Stations of the Cross in Birdhill Church often receive very favourable comment – being of great artistic and commercial value. They are the only ones of their kind in the country, being manufactured from chalk. The cost of installing these was donated by the following in 1927:

The attractive Church is a noted landmark on the N7, with many passers-by calling for a quick prayer and a respite from the hustle and bustle of life. The Church offers a haven of peace to troubled minds, a temporary place of solace to meditate and recollect. The Prayer for Travellers epitomises what The Church of Our Lady of the Wayside stands for among the people of Birdhill:

Our Lady of the Wayside,
Be pleased, we ask you,
To keep guard over us,
Your servants,
Along all the roads of life:
Be our help as we set out,
Our comfort on the way.
Bring us forward when we grow tired,
Protect us when trouble comes,
That under your guidance,
We may happily reach our journey’s end,
And come safely home at last.
Amen.