The Co-operative Movement
The modern Co-operative Movement in Ireland is generally accepted as dating from 1889 when the first Co-operative creamery was established in Dromcollogher, Co. Limerick. In contrast to the British movement, a consumer movement based on industrial worker co-operation in the running of retail shops, co-operation in Ireland was destined to become almost exclusively producer co-operative based on agriculture.
Historically, Ireland had made a few significant contributions to the evolution of co-operatives. The old Irish clan system, which predates history, had a considerable co-operative content. Later there were examples of small communities such as Quaker settlements, which farmed land co-operatively and also some industrial communes, which recognised the value of small groups getting together to supply a product. There had been various co-operative associations of workers and craftsmen in Dublin in the early 1800’s, a period at which the histories of Co-operation and Trade Unionism are so intertwined as to be virtually inseparable.

Horace Plunkett
The Co-operative Movement, as we know it today (or as we knew it before the large conglomerates came on the scene), owes its origin to Sir Horace Plunkett. He was born in England in 1854, the son of Lord Dunsany, a wealthy land owner from Co. Meath. After some ten years ranching in America, he returned to Ireland in 1888. He worked for a time with the Congested Districts Board, which had been set up to provide relief for the farming community. Plunkett’s contacts with farmers convinced him that the only way to improve Irish agriculture was through co-operation. What he proposed was a kind of self-help. At the time, Irish agriculture was facing severe competition in the British market, brought about by cheaper freight rates from America and the colonies. In addition, the opening of railways in Ireland brought Irish industry under pressure from the mass-produced output of Britain’s industrial revolution.

Cleeves Creamery
Cleeves, Birdhill branch, stood at the rear of the present Post Office. Pat Tobin was manager. He lived originally in what is now the turf shed at the Post Office, before the current P.O. building was built in 1903 to house him and his family. This could be described as the first cavity building in the area, being erected mainly from loose stone, some cement and wire mesh. Paddy Flynn of Kilmastulla was the builder.

Cleeves Creamery merely separated the milk at Birdhill, although butter and cheese were also manufactured for a short time before financial difficulties caused these products to be terminated. The cream and some milk were taken by train from the local station. The supply was such that arrangements had to be made to take the milk twice per day to the Cleeves headquarters at Landsdowne in Limerick. Among the workers at the creamery was Johnny Teefy, who looked after the engine, which was steam driven and coal fired. The water was supplied from a specially bored well, 80ft deep and 3ft in diameter. A brass pump located 30ft down in the well ensured that a plentiful supply of water was always available. It is believed that the pump, though well covered with earth and concrete, is still intact. Jack Madden gave out the separated milk and took the cream to the railway station. Others to work at Cleeves included Red Jack Gleeson (Lacken), Jack Gleeson (Halpin) and Willie Buckley (Annaholty).
The old building, out of which Cleeves operated, stood until the mid 1940’s, when it was used mainly as a fuel shed. It ceased to operate as a creamery in 1921 when following a strike in Limerick, there was no outlet for the milk through Cleeves and the local farmers turned to the nearby Co-op. The manager’s residence was sold in 1927 by the Dairy Disposal Board to Joe Herbert who had worked with Cleeves in Annacotty and came to work as manager in the new Co-op. 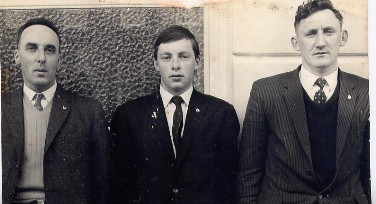 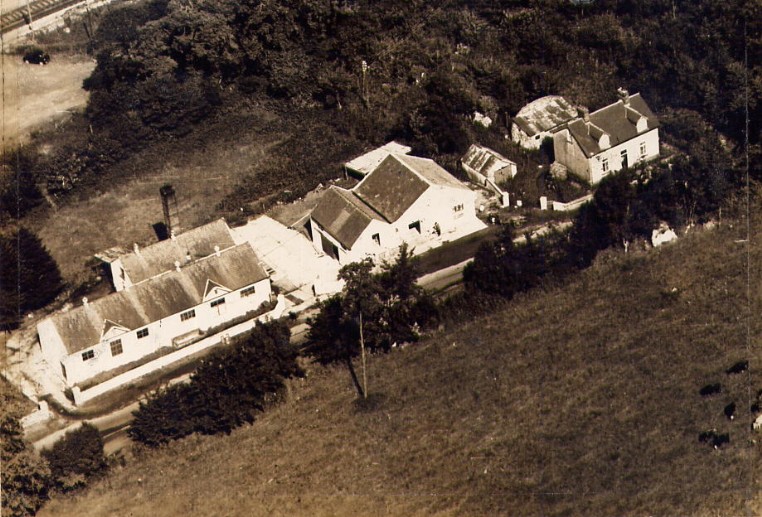 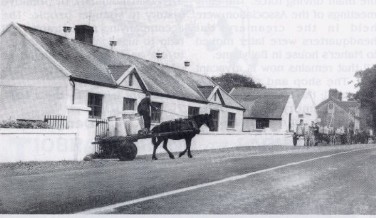 Frontal view of Birdhill Creamery, Store and Shop and Herberts residence in 1964

Focal Point
The creamery was always a great focal point in the community. The younger generation of today, despite their vivid imaginations, will never be able to conjure up images of this vital social element of rural Ireland in bygone days. The image of the ass and cart or horse and cart trotting lazily in the early morning, bearing the fruit of the family’s labours in the cow house, to its destination; the line of carts outside the creamery awaiting their turn to be divested of their burden; the hustle and bustle as the owners squeezed their animal and cart through a maze of ‘traffic’ in the creamery yard as they edged their way around to refill their churns with separated milk; the exchange of news; the discussions on world events; the friendly banter among ‘neighbours’ from different parishes and even different counties – especially rich at time of hurling matches – these, alas, are only memories for some of us and mere realms of primitive fantasy for others. We could even tell the time of day at which each farmer passed to the creamery. Questions would be asked if he was earlier or later than his usual time. And one could also recognise the approach of every farmer by the sound of the hooves and the rattle of the tankards. We had a special welcome for some of the passers-by who were not unknown to throw a few sweets our way on their return journey.
The 1960’s brought a major change. The horse gradually gave way to the tractor and car. Trailers now filled the creamery yard as the pace of life seemed to be stepped up and there was less time for chat. Change also came to the status of Birdhill Creamery. The milk had been taken to Annacotty up to 1948; from then until 1963 Newport were the recipients and finally it was sent to Cappamore. Then in 1967 it was decided to amalgamate with Cappamore.

Prior to that, the Golden Jubilee of the Co-op was celebrated in 1964. The success of the society in its first fifty years was the subject of praise by all who attended a special dinner in the Hotel Ormond, Nenagh. The day had commenced with Mass in the Church of Our Lady of the Wayside, celebrated by Fr.J.J. O’Rourke, whose father was chairman of the committee at the time. Later at a special blessing in the creamery itself, Fr. O’Rourke invoked God’s blessing on the creamery and its members. It was a memorable occasion for John Hassett, the only surviving member of the first committee. 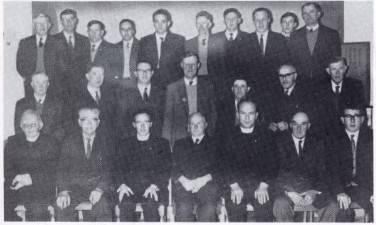 Following amalgamation in 1967, the Birdhill suppliers had 2 representatives on the Cappamore Committee. Pa Carey and Tom Ryan attended the monthly meetings. They continued as representatives when Cappamore was absorbed into the Ballyclough empire in 1974, where they found a much wider diversification of activities to command their attention. Later Barry Gleeson replaced Pa Carey as representative. More recently, reps included Mick Caplis, Lanty Ryan,Clement Ryan and Michael Hayes. Currently (2014) Mike Caplis voices the interests of this area in the Dairygold boardroom. (Dairygold was formed with the merger of Ballyclough and Mitchelstown in 1990). 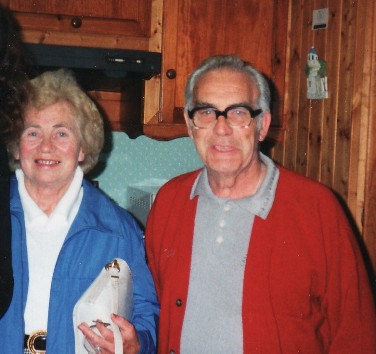 Building Demolished
Sadly, it was found necessary to demolish the old creamery in 1987. Prior to that it had been merely a collection point for milk, where a mobile collection unit met the suppliers at an appointed time. Indeed, separation of milk had ceased at Birdhill in 1973, with milk being taken to Cappamore for separation. Nowadays farmers have their milk collected at their own doorstep by Dairygold and Nenagh bulk-containers. The advent of refrigeration, levies and quality-control have brought new methods of work but also greater demands and standards. Times, indeed, have changed. 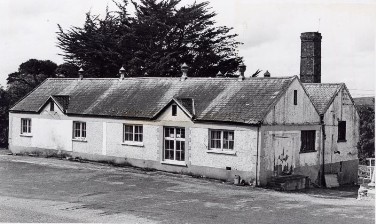 The old creamery building just before it was demolished in 1987

The building, which served the community so well for over half a century, stood as a monument to the men of vision, who in 1914 had the courage and foresight to reach for new horizons in the development of a better life for the people of Birdhill. Not only did it serve its primary function as a creamery, the old Butter House also served as a useful social venue in the 1940’s, 50’s and 60’s. In the thirties Newport Drama Group had staged many performances in the old Cleeves Creamery. When this fell into disrepair they used the more spacious Co-op. In 1942 the Birdhill Players staged ‘Wigs in the Green’ here. This particular Drama Group had been organised at the instigation of Mr. Fitzgibbon of Lisnagry who had been visiting the local primary school to give lessons in Irish. The proceeds were to fund some Irish scholarships. Those who participated in the play were: Tom Ryan (A), Mick Moroney, Thomas Floyd, Timmy Mannion, Celia Ryan, Mai Caplis, Babby Moroney, Maura Mannion, Maura Ryan (G) and Beatie Hurley. Eddie Gleeson was the producer. They also staged a few short plays in Irish.
The creamery was the venue for a meeting of Muintir na Tíre in 1948, when the founder of the association, Canon Hayes, was invited to address the local people. However, the initial enthusiasm was not maintained and after a few meetings the hope of the prime local motivators, Tom Gleeson, Harry Powell and Canon O’Rahilly had to be abandoned. The latter was also instrumental in showing a number of films in the creamery in the early 1950’s. In 1963 a branch of Macra na Feirme was started, with Maurice Hassett as the main driving force. The early meetings of the association were held in the creamery but headquarters were later moved to Maher’s house in Ballyhane. 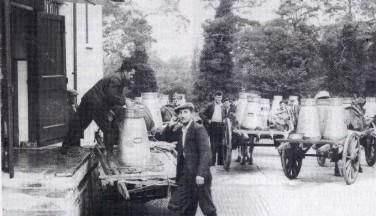 View of the Creamery yard and platform where milk was taken in. Included in the picture are John O’Meara (behind door), Jimmy Kenna (on cart), Mick Hassett (front), John Lyons & Timmy Ryan (both of Boher), Sean Ryan (Skehan) and Jimmy Foley. 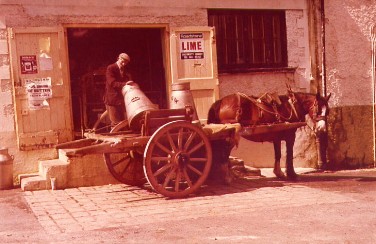 Jack McKenna unloading tankards on to the platform 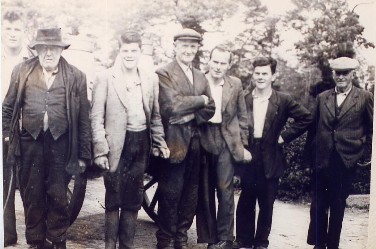 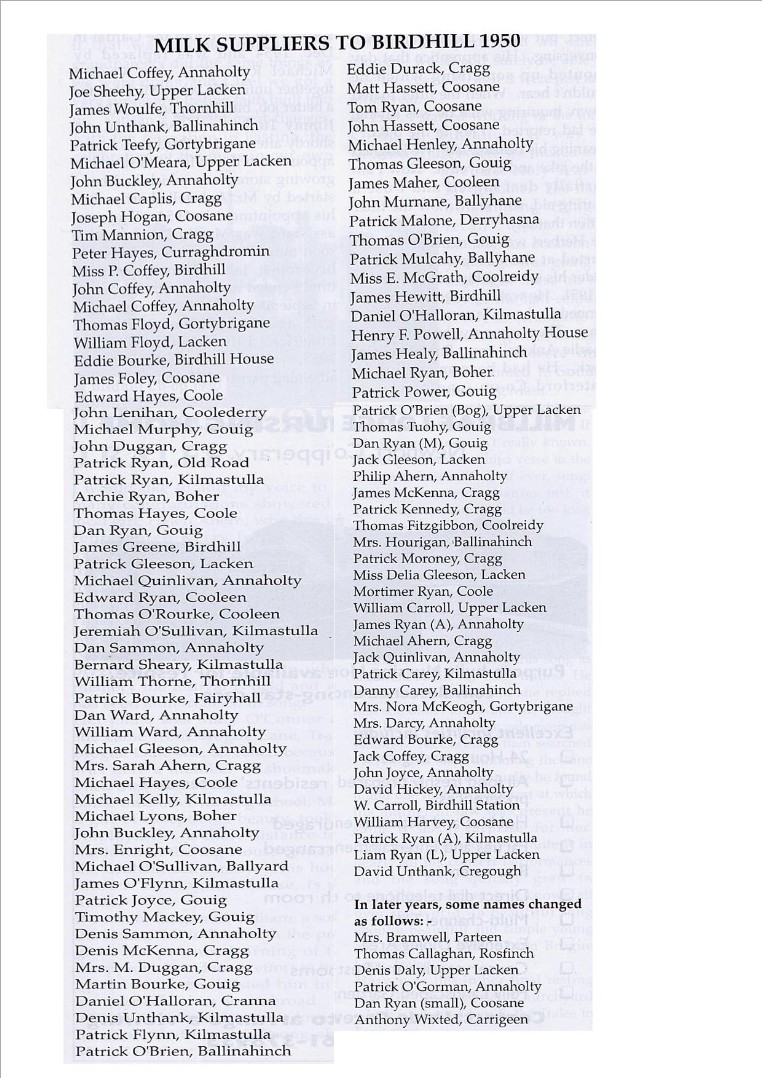